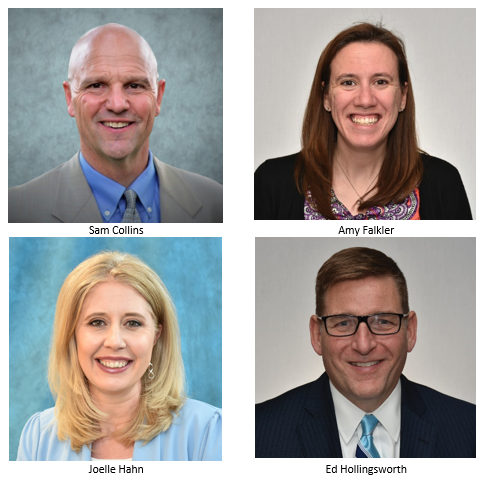 Ed Hollingsworth was hired in 2014 to lead the Northwest Federal internal audit program and most recently held the title of VP of Internal Audit. With 35 years of experience with various financial services companies, his recent promotion to SVP of Risk, Audit, and Program Management expands his role to oversee key risk management, assurance, and strategic initiatives under one independent umbrella.  “I’m excited to be in a position to further efficiencies, cooperation, and independence of functions with common risk and control objectives,” said Hollingsworth.

In April of this year, Sam Collins was hired as the Foundation Executive Director, bringing with him 35 years of service to the community, beginning with the Boston Public School system where he founded one of the nation’s first service learning and experiential education programs. “I’m very happy to be working in this capacity for such an outstanding organization,” said Collins. “Their commitment to the community is unwavering.” One of Sam’s first initiatives is the Diaper Drive with a goal to deliver 175,000 diapers to the NOVA Diaper Bank.

Amy Falkler was promoted VP of Internal Audit under new SVP Ed Hollingsworth to fulfill the responsibilities he previously held. Falkler was first hired by Northwest in 2016 as a Senior Audit Manager and promoted to AVP of Internal Audit where she managed operational audits. “Working at Northwest has developed my skill set so that I can move up,” said Falkler.  In her new role, she will oversee the Credit Union’s Internal Audit function and report functionally to the Supervisory Committee.

“We have such great employees here at Northwest,” said Jeff Bentley, President and CEO. “I’m always happy to leverage our internal resources and promote from within.”

Northwest Federal Credit Union is a full-service financial institution ranking among the largest credit unions in Virginia and in the top 60 credit unions in the nation. Established in 1947 and headquartered in Herndon, Va., the Northwest Why statement is to serve and inspire to transform lives. The Credit Union currently serves more than 260,000 members and has assets in excess of $4 billion. For more information, visit www.nwfcu.org or connect with us on Facebook, Twitter or LinkedIn.