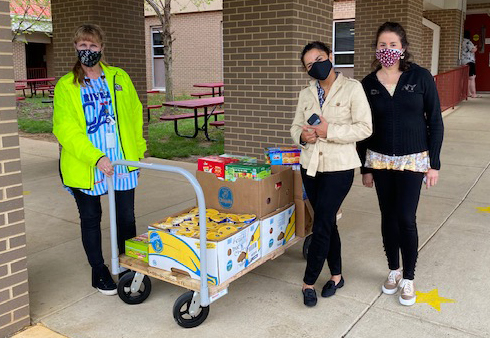 “The NWFCU Foundation has the absolute best supporters, credit union members and corporate partners,” said Executive Director of the NWFCU Foundation, Kaycee Childress. “We believe that no child should go hungry. With the help of our partners and supporters we are helping to change that terrible reality and put much needed food in hungry tummies. We cannot thank everyone who donated to this important initiative enough.”

Each year the Foundation works alongside Northwest Federal members, employees and corporate partners to gather and deliver food to Fairfax County and Loudoun County public school systems for distribution to at-promise students and  various after school programs for at-promise young people. With many students still home due to the COVID-19 pandemic, and many families still suffering extreme financial hardships during this trying time, the Foundation was ready to distribute much needed supplies to food-insecure children.

“We are so grateful for the incredible support the NWFCU Foundation received during the Food Drive,” said Jeff Bentley, President and CEO of Northwest Federal Credit Union and Chairman of NWFCU Foundation. “With an increase of nearly 25% in donations from last year, we can expand our support to local families who have found themselves in need of help. We could not have exceeded our goal without our partner, Giant Food, and local Giant employee, My Pham, who helped make this partnership a reality.”

The NWFCU Foundation holds several donation drives throughout the year to support their mission to support the health, well-being and education of young people. Find out more about their drives and scholarship program.

The NWFCU Foundation was established in 2004 to promote and manage Northwest Federal Credit Union’s philanthropic activities. The mission of NWFCU Foundation is to empower young people to achieve their goals by helping them learn, excel and celebrate life and by supporting their health, well-being and education. The NWFCU Foundation is a 501(c)(3) organization. Donations are tax deductible to the extent permissible by law for those who itemize deductions. For more information, visit www.nwfcufoundation.org.

Northwest Federal Credit Union is a full-service financial institution ranking among the largest credit unions in Virginia and in the top 60 credit unions in the nation. Established in 1947 and headquartered in Herndon, Va., Northwest Federal's Why is to serve and inspire to transform lives. The Credit Union currently serves more than 260,000 members and has assets in excess of $4 billion. For more information, visit www.nwfcu.org or connect with us on Facebook, Twitter or LinkedIn.